A 13-acre parcel of land located at the southwest corner of West 64th Avenue and Indiana Street was rezoned from RA- Residential Agricultural to R6- Residential 6 District. Howard Ranch — which will include 22 single-family detached homes, 12 cottages and 20 duplexes — is set to occupy the infill parcel between existing subdivisions Wildflower Ponds and the Lakes at Westwood Villas.

The proposal laid out by redT on Aug. 15 was the seventh iteration of the Howard Ranch development plan presented to city staff. At a May 17 meeting of the Arvada Planning Commission, the commission voted 6-1 against the proposal, citing emergency egress concerns among other issues with the proposal.

Then, the developer postponed their city council hearing — initially set for June 6 — with redT Owner Nathan Adams stating at the time there would be “some really obvious losers if we go to city council on June 6.”

redT also set up a website directing people to send form emails in support of Howard Ranch to city council, a move that Planning Commission Chair Michael Griffith described as “something I have never seen before in our city. I believe it sets a bad precedent.”

In advance of the Aug. 15 council meeting, all seven council members visited the site with city team members, according to Arvada Mayor Marc Williams. redT put together a Good Neighbor Agreement with the Lakes of Westwoods HOA and promised to plant 3,000 new trees and pay $10,000 to have the trees planted in Arvada.

The Howard Ranch proposal that was passed by council includes two acres of open space and a secondary emergency access point. All homes will be equipped with residential fire sprinklers. 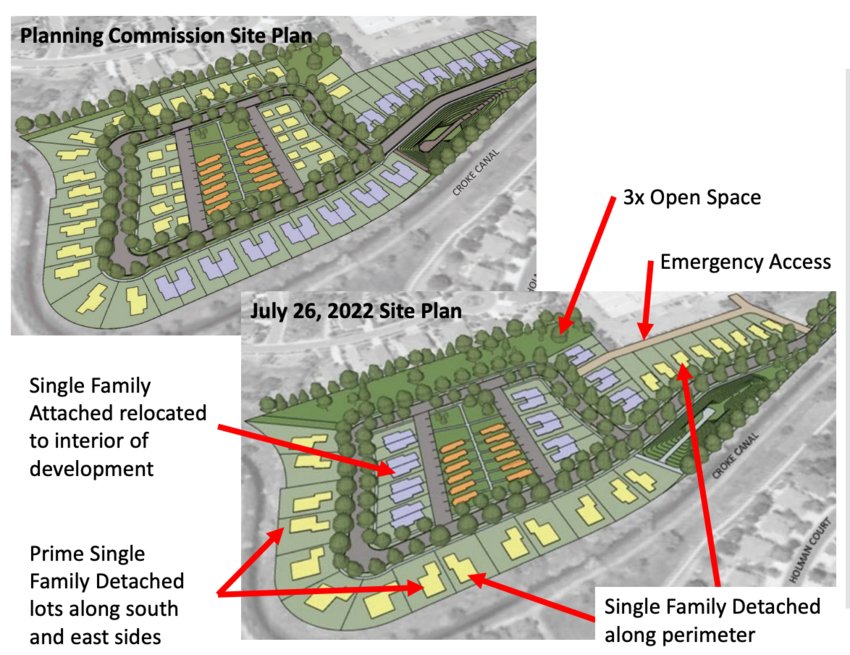 Side-by-side of differences between Howard Ranch proposal at Planning Commission vs. City Council.

Twenty public commenters attended the Aug. 15 meeting to voice their thoughts on the project. While most commenters voiced concerns, a few supported the proposal.

Councilmember Bob Fifer praised redT’s engagement with the community and adjustments to the plan.

“I’ve done this 11 years and I have to say, this is probably one of the first times we’ve really witnessed the community engagement from the developer,” Fifer said.  “I appreciate the fact that you took the time, you took the energy, and I genuinely feel like you’re trying to do something good for the community… I’ve never heard of a developer doing 7 iterations of a plan. I’ve never heard of a developer canceling two council meetings with us just so you can get it right.”

After the meeting, Adams said that the pushback that took place early in the development process was a “wake-up call” for redT to do more community engagement.

“Monday’s council hearing was the culmination of 18 months of work, and after receiving a unanimous 7-0 vote in favor of the project, we are excited to be moving forward,” Adams said. “The first 15 months were heavy interaction with staff and planning commission, and three or four months ago we had a wake-up call that we needed to better engage the community.”

Griffith said he was glad that redT engaged their neighbors and worked on the planning commission’s concerns.

“redT had a PR campaign that was unlike anything I’d seen in the city,” Griffith said. “I felt like that was a challenge for the adjacent residents to have their voices heard, and that concerned me. But at the same time, after watching the council meeting, I understand that redT spent a great time of energy and effort reaching out to the adjacent residents.

“I think this is an example where the applicant put extra effort into trying to meet the challenges that were brought up in the commission public meeting and I do like to see that,” Griffith continued.

All four seasons come to Lakewood this autumn
This fall season will see more than just Autumn, but Winter, Summer and Spring too with Colorado’s Baroque Chamber Orchestra performing Vivaldi’s Four Seasons on Oct. 7 at the Lakewood …
City team gauging feedback on proposals for 20-year future of Olde Town Arvada
Members of the Arvada city team and contracted landscape architects Dig Studio held a public hopen house at Denver Beer Co. on Sept. 21 to gauge feedback for a number of proposals and ideas …
Arvada Historical Society celebrates its founders at annual event
For the 19th year, the Arvada Historical Society celebrated notable historical figures from the city’s history at the Arvada Cemetery on Sept. 24. In honor of the society’s 50th …