The 97th iteration of the event to feature carnival rides, parade, live music and more Sept. 9-11

After a year of uncertainty, the Arvada Harvest Festival is back. The 97th edition of the event — which dates back to 1925 — will take place from Sept. 9 to 11 at the Harold Lutz Sports Complex at 58th Avenue and Kipling Street.

The 97th iteration of the event to feature carnival rides, parade, live music and more Sept. 9-11

After a year of uncertainty, the Arvada Harvest Festival is back. The 97th edition of the event — which dates back to 1925 — will take place from Sept. 9 to 11 at the Harold Lutz Sports Complex at 58th Avenue and Kipling Street.

The parade will be held at 9 a.m. Sept. 10 with a pancake breakfast taking place beforehand. The midway opens at 4 p.m. on Sept. 9.

This year’s event will feature carnival rides, a parade, vendor booths, a beer garden, a spelling bee and live music from acts including Hazel Miller and the Collective, The Trampolines and Stone Beat Invasion. New to this year’s Harvest Festival are a home run derby and a car show, slated for Sept. 9 and Sept. 11, respectively. 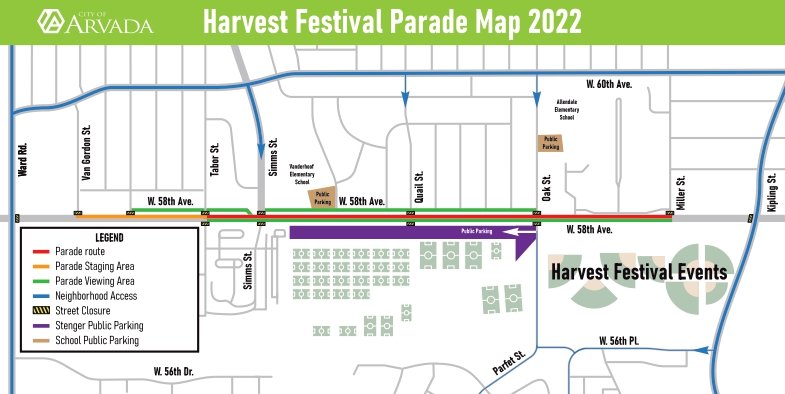 One of the main challenges that led to the cancellation of last year’s event was the location. The Harvest Festival has typically been held in Olde Town, but the street closures made the prospect of a parade untenable for the city. City team members helped the Harvest Festival Committee settle on the new location at Lutz Sports Complex.

“We’re absolutely excited to be back,” Harvest Festival Committee President Renee Nelson said. “Being away for two years took a big toll on us. Being back, we’re ecstatic. We’re dealing with a lot with the change of venue, but we’re working through that — that’s what we do best.”

Nelson added that she’s been happy with the number of scholastic bands that have signed up for the parade, especially in light of recent cuts to school band programs.

She also said that this year’s Harvest Festival will include vendors such as Hacienda Tacos, Cherry Bowl Bakery, Bear Paw Mixes and the Honeybee Festival, which incorporated with the Harvest Festival this year.

Nelson invited people to come to planning meetings set for Sept. 1 and 6 at the Jaycee’s Hall at 5640 Yukon Street to give feedback in advance of the event.

“We’re excited, what we would like to throw out there is there is going to be some bumps,” Nelson said. “I’m sure people are going to have stuff to say about our new location, but they’re welcome to come for our Thursday meetings.”

Nelson said that if people can’t attend the meetings and want to provide input before the event, they can email arvadafestival@aol.com. A full schedule of Harvest Festival Events can be found at arvadaharvestfestivalparade.com.

The jazz of Nat King Cole is coming to Lakewood

Retrievers, their owners are top dog at Goldens in Golden

Fort Lupton council OKs permit for proposed oil well, drilling facility
Fort Lupton City Council approved a special-use permit for 10 horizontally drilled oil wells and one production facility during its meeting Feb. 7. The proposal is to use 14 acres of land near …

A tale of trails: Bike riders, advocates consider options for getting around
Governor Jared Polis' push to get legislators to approve $500 rebates for electric bikes is pushing bicyclists and transportation advocates to wonder if the infrastructure exists in the northern …

State of education report finds teachers in need of more support
Survey results conducted by the largest educator’s union in Colorado paint a bleak picture of how most educators feel in their jobs. The Colorado Education Association recently surveyed around …

How to defer payment on rising property tax bill
Many Coloradans’ property tax bills are spiking because of rising home values across the state, but there is a way to put off a big hit to your wallet happening all at once. The legislature passed …