In the wake of low enrollments and empty classrooms, some Jefferson County elementary schools could close

With local elementary schools on the chopping block, JeffCo superintendent Tracy Dorland prepares Aug. 25 recommendation to the board.

In the wake of low enrollments and empty classrooms, some Jefferson County elementary schools could close

School is back in session — potentially for the last time at some Jefferson County elementary schools.

As enrollments fall and classrooms stand empty, Jefferson County Public School District Superintendent Tracy Dorland will make a recommendation to the school board on Aug. 25 suggesting which schools to be closed after the 2022-2023 school year.

Jeffco Schools have a capacity for 96,000 students. Currently, the district has 69,000 students enrolled.

Jeffco Schools Chief of Strategy and Communication Lisa Relou said the district is looking into a number of factors when making the decision on which schools to close, including enrollment and building utilization.

Relou said that the data will be considered in conjunction with factors including the impact on other nearby schools, and that the criteria for recommending which schools to close is still being fine-tuned in an effort to solve what Relou called “a big puzzle.” She did not comment on which schools are in danger of closing.

“Certainly there are some factors we’ve been talking about all along, like enrollment numbers and the utilization of the building that’s being used, but that also feeds into the ‘How much is it costing us to educate students on a per people basis at each school?’” Relou said.

Relou continued that there's not one factor in particular that the district has landed on yet.

“We’re still looking at what our criteria is going to be,” Relou continued. “You can’t look at one school in isolation, of course. The small elementary schools issue affects nearly every articulation area in our district, and you have to really look not just at the school that might be very small or underutilized, but at the schools around it."

After Dorland gives her recommendation to the board, the board will vote on whether to move forward with the proposal. That meeting is tentatively scheduled for Nov. 10, according to Relou. Community engagement work will take place throughout the process, with engagement specifically centering on the future use of the closed school buildings slated to begin in January 2023.

Because of that, the board asked district staff to look at the district holistically, according to Relou. The timing of the board’s decision this time around is aimed to give parents enough lead time to go through the choice enrollment process and not be in the same predicament as Allendale and Fitzmorris parents.

“(The choice enrollment) process begins in January for most districts … we would all be telling you around the same time which school your child has a seat in,” Relou said. “So, the off-cycle means that entire first round of choice window was completely missed.

“Those families didn’t know … those parents weren’t expecting to make a choice,” Relou continued. “They thought they’d be in the same school they were in last year and then we’re telling them ‘Your school is going to be closed next year and now you have to make a choice. And your choice comes after all of these other people have made and been accepted into their choices.'”

Relou said that as soon as the district makes its decision in November, district staff will work with families and staff at the affected schools to ensure that all parties have a positive experience for the remainder of this school year and some clarity on what the following year will look like.

“The thing that might be a little bit different (from previous years) is that there will be between the school that is closing and where (students) will be going, more interaction between those two schools to make the transition smoother at the end of the year,” Relou said. “We have seen — I can speak from my experience with the Fitzmorris closure in the spring of last year — just how quickly after the uncertainty was over, that our staff members and families were getting back to the day-to-day business of school and great experiences for students and staff.”

“It’s hard that we have to do this work … unfortunately we’re at a point where we don’t have a choice,” Relou said. “We have to start to do something about this. We’re going to be honest with our community when we do get into this about where there’s an opportunity for input and where there isn’t."

Relou continued that the question isn't "Are we going to close these schools?" but "How can we treat, honor, respect and celebrate as changes are made as a district to ensure that the 69,000 students the district does have are having a thriving, extraordinary experience?" 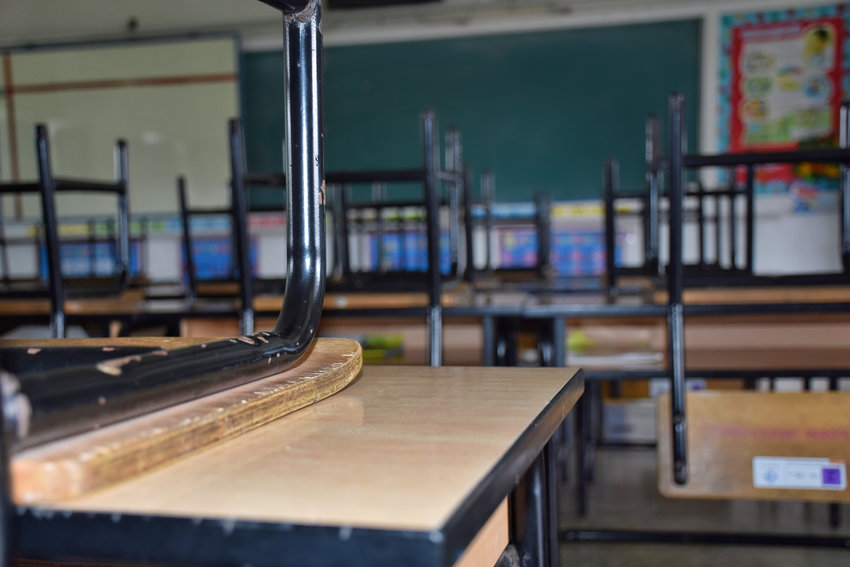 Desks stacked on top of each other at a school.

Why are there so many neighborhood elementary schools in Jeffco?

To understand how the district got to the point of having to shutter some of its schools, it’s helpful to know why there are so many elementary schools in Jefferson County — 84 in a district of 69,000 students.

The district was incorporated in 1950. At the time, 55,000 people lived in Jefferson County, compared to over 580,000 now. The county grew considerably over the course of the 1960s and 70s, and with that development, schools followed.

Mark McGoff served on Arvada’s City Council from 2008 to 2019. During his tenure, he oversaw the approval of developments including Leyden Rock and Candelas.

McGoff said that when a development is proposed, the plans are forwarded to the school district, which usually agrees to provide a school within the development as long as the developer provides land to the district. The prevailing philosophy at the time of McGoff’s council tenure was similar to that throughout the decades preceding it — small, walkable neighborhood schools.

“Everyone was in line with the philosophy for small schools rather than a large school,” McGoff said. “That’s why today we don’t have big parking lots at elementary schools; we intended that kids would walk or be dropped off by their parents. So, a development that had 300 to 400 homes would have an elementary school.

“The whole idea was that it would be walkable and a neighborhood center as well as a school,” McGoff continued.

Kimberly Eloe, Jeffco School’s executive director of communications, echoed McGoff’s sentiment and said it was representative of the national educational philosophy at the time.

“During the 1960s, the district initiated its development to establish neighborhood schools located geographically across the district,” Eloe said. “As developers came into the community and wanted to build home developments they then set aside a piece of property so that Jeffco Public Schools would build a neighborhood school for that new development. This was a national model and approach used in public school districts across the United States in the 1960s forward.”

Schools that were built during the 1960s include Allendale, Secrest, Fitzmorris, Campbell, Swanson, Peck and Hackberry Hill. Weber was founded in 1972.

Man taken into custody in connection with 6 burglaries

Talent of all ages highlighted at Centennial Holiday Artisan Market

Fort Lupton urges residents to lock cars, skip the warm-up
With the recent cooler weather,  the city of Fort Lupton has seen an increase in thefts of and from "puffing vehicles" and other unlocked motor vehicle thefts, as well as vehicle trespassing …