The authority on all things Arvada, Young was a dogged researcher and an incomparable friend

A portrait of Nancy Young taken in La Dolce Vita Coffee Shop by former Arvada City Councilmember Nancy Ford.
Ford said it was Young's favorite picture of herself. Courtesy Nancy Ford.
Nancy Young pictured outside La Dolce Vita Coffee Shop for a 2015 Arvada Press profile. Friends have cited Nancy's 'My Name Is' article as the most she shared publicly about herself.
Arvada Press file photo.

Above all, I care passionately about my home and I believe in integrity, respect and honesty – honesty will get you everywhere.”
Nancy Young
Rylee Dunn
rdunn@coloradocommunitymedia.com

Nancy Young loved Arvada in a way that made you fall in love with it too.

As she put it, Young was born in Arvada on Jan. 7, 1952, “When the Arvada Square was a field, the Arvada Plaza was a field and you knew it was a small town because everyone knew everybody’s business." Young was an intrepid researcher who became the foremost expert on Arvada history during her lifetime.

Young died in her home on Nov. 4 after fighting an illness. She was 70 years old.

Young is survived by her sister and brother-in-law, Susan and Daniel Westervelt — both of whom live in Alaska — as well as many neices and nephews.  She is preceded in death by her parents, Kathryn and Jack Young, and her brothers John and Thomas.

A 17-year board member of the Arvada Historical Society, where she contributed swaths of original research on the city’s history, Young frequently volunteered at the McIlvoy House and helped preserve the Historical Society’s archives.

More than anything, Young enjoyed sharing history with others.

“She just loved sharing the history with visitors who came in,” Arvada Historical Society President Karen Miller said. “She was our go-to person when we needed an article written or researched, when people call or have questions about the history of a house or their family. I would always refer them to Nancy.”

“It’s like Nancy and Arvada are synonymous to me,” Susan Shirley, a friend of Young’s, said. “Almost everything I know about Arvada history I learned from her.”

“She was always willing to help if there was something you wanted to look up or some question that would give you insight into maybe your family or something else,” Buddy Sexton, a friend of Young’s, said. “She loved research. She’ll be sorely missed.” 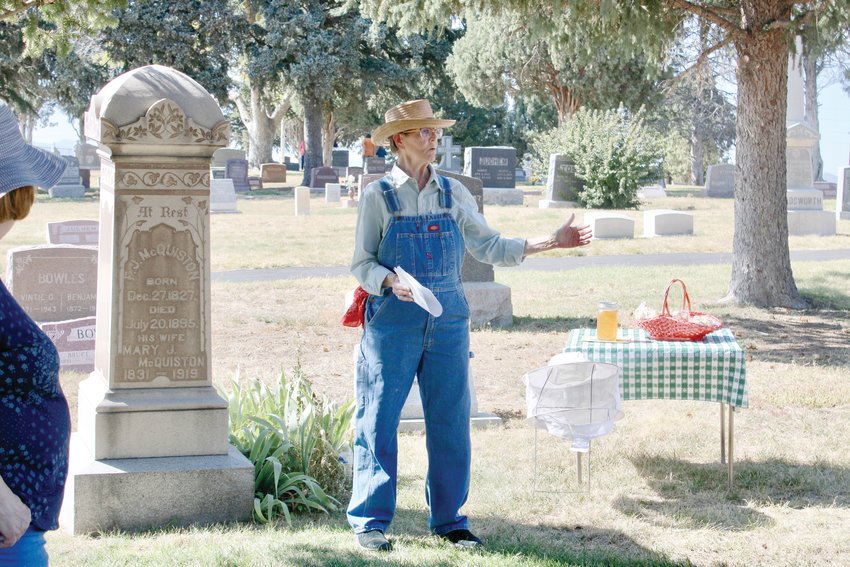 Armed with an unrelenting passion for the city that she attributed to her “deep roots here,” Young’s love of the city came from being steeped in its lore. Young’s grandfather was a member of Arvada’s inaugural fire department; her parents were lifelong Arvadans.

A graduate of Arvada West High School, Young continued her studies at George Washington University and visited Arvada “four, five, or six times a year” when she lived out of state. After graduating with a degree in finance, Young worked as a bank stock analyst in New York City after college.

She moved back in the early 2000s to take care of her ailing mother and stayed in Arvada ever since.

“They were one in the same, her and Arvada,” Shirley said. “Because they went back together way before anyone paid attention to Arvada. That was her place. This was her town, this was it. And her family was a big part of it. She’s got actual memories of that terrible fire that happened in Olde Town.”

She was, in the words of Arvada Mayor Marc Williams, “A true historian who knew more about Arvada than any other living person in our community at this point in time.”

“There were times were Nancy and I did not see eye to eye, but one thing that we always saw eye to eye on was our mutual respect and love for this community,” Williams said. “We really lost a treasure.”

“She was strong in her opinions,” Former Arvada City Councilmember Nancy Ford said. “I think that’s a positive trait. I think people didn’t understand Nancy in some ways. I think people saw her as a troublemaker, but I think she was really concerned about her city and when someone cares that deeply, it’s rooted in their body. It’s very much a part of who they are.” 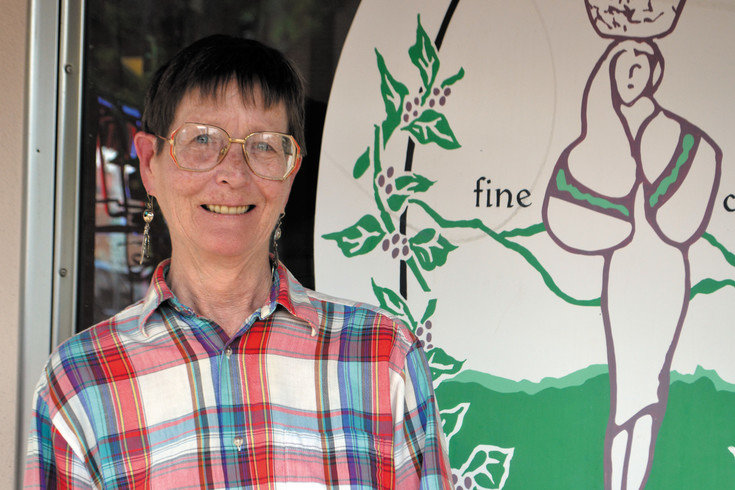 Nancy Young pictured outside La Dolce Vita Coffee Shop for a 2015 Arvada Press profile. Friends have cited Nancy's 'My Name Is' article as the most …

Dedicated to preserving Arvada’s small-town feel, Young was a founding member of Stop Arvada Walmart, which later led her to become a co-founder of Arvada for All the People, which sued the City of Arvada over the Olde Town Residencies development — commonly known as the “$30 Land Deal” — which is currently under construction.

Young’s passion was ever-present in her advocacy, but never at the expense of her scrupulous historical knowledge or kindness.

To wit, many of the folks who were involved in citizen action groups with Young count her as a close friend.

“I don’t know anyone who cared about Arvada as much as Nancy did, not just about our history, but about our present and our future,” Arvada for All the People co-founder and Young’s friend Harriett Hall said.

“This is clear from the time and energy she put into teaching school children about Arvada‘s history, and the value of our community, and her keen interest in issues related to the development not just of Olde Town, but of our whole city,” Hall continued.

“Even though we are both Arvada natives, I didn’t meet Nancy until early 2013,” Young’s friend Cindi Kreutzer said. “We were both involved in citizens groups opposing two new urban renewal projects at the same time… Nancy was passionate about her hometown and was not afraid to voice her opinions to anyone who would listen.

“She did so dozens of times and whether or not you agreed with her, you could count on her information being completely accurate,” Kreutzer continued.

“Nancy was someone who I trusted and who was always very friendly,” Young’s friend Debbie Hansen said. “She was a straight shooter and could back up what she was talking about with facts. She loved Arvada and was always willing to share information about it.”

Miller said that Young was a champion of what she called “Old Arvadans,” longtime residents of the city who are passionate about maintaining the community’s spirit.

“Growing up in Arvada, when she was a child, Arvada was kind of a one-horse town, and Arvada just has such a history compared to a lot of the surrounding cities and suburbs,” Miller said. “And I think that the people that grew up in Arvada are what we like to call the ‘Old Arvadans,’ they really care. They realize that the community’s personality is so much shaped by the history.

“To this day, it kind of helps people to keep that small town feel and reputation for being friendly and so on,” Miller continued. “It’s because the people that grew up here, the “Old Arvadans,” still view it as a small, friendly town.”

She was able to impart that perspective and love for Arvada on those who knew her.

At one city council meeting, Young spoke out against a conditional use permit for a business park on Indiana Street that would lead to the demolition of the last remaining homestead of Ralston Crossing; a settlement that was a forerunner of Arvada.

The proposal was passed by council, but Williams recommended that the developer work with Young on a plaque for the homestead.

“I certainly appreciate the history,” Developer Kenny Lombardi said at the time, “I had no idea of the history there. I’m not opposed to a sign if someone wanted to provide the sign for us, we would certainly try to incorporate that in our landscape because it is some neat history.”

Recently, Lombardi said that he and his wife had been periodically going out to lunch with Nancy over the last few months and that he was still planning on installing a commemoration for the site once it is completed.

“It’s still in the works,” Lombardi said. “There will be something there.”

She clarified why so many things in town are named “Ralston,” spoke out against last year’s cancellation of the Arvada Harvest Festival, helped design a mural of the city’s history at one of her favorite restaurants, The Butchery, and educated folks on the beginnings of the Historical Society. 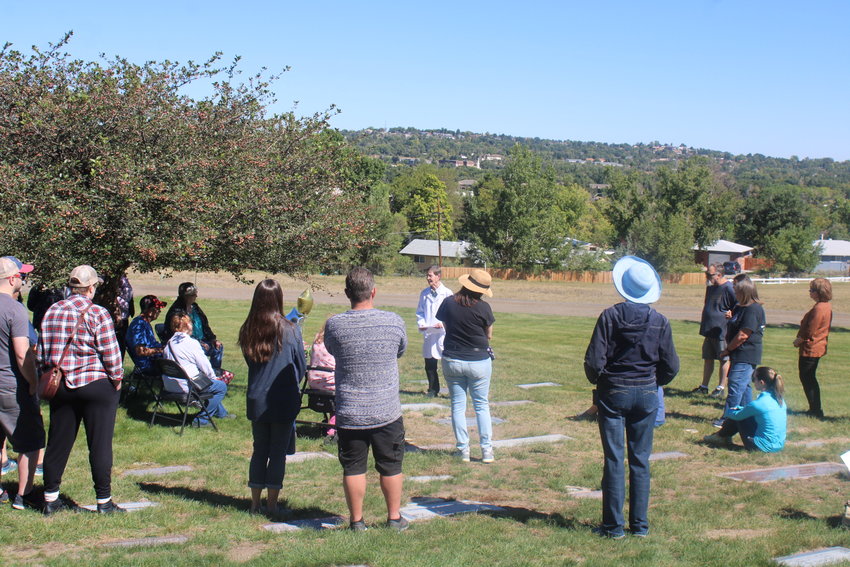 From the community editor:

Nancy did not like publicity — or, sometimes, credit — for her historical knowledge; she believed it belonged to everyone.

The last time I worked with her was at this year’s Cemetery Tour, where she portrayed Gail “Doc” Gilbert, a two-term mayor of Arvada. She asked that if I had to take a picture of her, I do so from far away to capture the crowd of onlookers and not focus on her.

The Arvada Press wrote a profile of Nancy in 2015 that many of her friends consider the most she ever shared about herself publicly. It concludes with the following statement from Nancy:

“Above all, I care passionately about my home and I believe in integrity, respect and honesty – honesty will get you everywhere.”

I have never met anyone who managed to be so unapologetically honest yet so unrelentingly kind.

Nancy personified Arvada, but, in a way, the city is a reflection of her as well. There is a unique friendliness that persists here, a small-town hominess that remains even as the city grows.

Wherever honesty, kindness and a love of history exists here, it will be, at least in part, because of her.

Arvada will never truly be without its greatest champion: Nancy Young.

Nancy’s sister is organizing a Celebration of Life, the details of which will be published in the Arvada Press when they are available. The family requests that donations in her memory be made to the Arvada Historical Society.

'It was just anarchy. A rampage': Victim recalls being attacked by more than a dozen teens on light rail train

Work underway on new post office mural
A concrete retaining wall adjacent to the post office on Allison Street in Arvada is becoming a work of art.