West Woods Golf Club has begun the planning of their upcoming `Forward Tees' project, an initiative that will create closer tee boxes on the Sleeping Indian and Cottonwood courses. The goal of the …

Signage at the entryway to West Woods Golf Club.
Photo by Ryan Dunn

View of a hole on the Cottonwood golf course at West Woods Golf Club.
Photo by Ryan Dunn

Proposed distance for the new "Forward Tees" as suggested by the 2019 USGA study, including a higher variance of club types suitable for reaching the green.
Courtesy of Steve Lynes

Appraisal of the existing tee boxes at Sleeping Indian and Cottonwood golf courses from a 2019 USGA study, finding that only par threes are reachable from the gold tee for average women golfers.
Courtesy of Steve Lynes
Posted Sunday, March 7, 2021 1:36 pm
Ryan Dunn
rdunn@coloradocommunitymedia.com

West Woods Golf Club has begun the planning of their upcoming `Forward Tees' project, an initiative that will create closer tee boxes on the Sleeping Indian and Cottonwood courses. The goal of the project is to make the courses more readily playable for beginners and other players with slower club speeds.

The project came to fruition after a 2019 United States Golf Association study found that a female golfer with average club speed teeing off from the gold tee box could only expect to reach the green on the course's par three holes. The study also concluded that the majority of holes on the Sleeping Indian and Cottonwood courses are 40-50 yards too long for the beginner golfer.

Appraisal of the existing tee boxes at Sleeping Indian and Cottonwood golf courses from a 2019 USGA study, finding that only par threes are reachable …

As such, the USGA recommended that West Woods construct an additional tee box five to 50 yards in front of the current forwardmost tee. Construction — slated to be a “soft build” that will minimize the amount of construction and construction equipment on the courses — is scheduled to begin as soon as the weather clears up, with the goal being to complete nine holes this spring.

Course personnel have begun laying out the positions of the tee boxes, but no ground has been moved yet. West Woods Course Manager Steve Lynes said he believes the project will entice new and inexperienced players to try the sport.

“Typically, a beginner that can hit a ball consistently — they're ready to play, but then you put them on a regulation par four and it just looks like it's a mile away to get to the green,” said Lynes. “What happens is those types of players, they never can hit a shot into the green with a short iron in regulation. They're always kind of struggling to make a par; it's really difficult.

“When we're trying to integrate new players into the game, we take them out on the course, we kind of get them to a point where they can hit the ball consistently,” Lynes continued. “For those players, for sure, their first time out on the course is going to be a lot more fun. It will be easier to make consistent players out of them; they'll want to come back.” 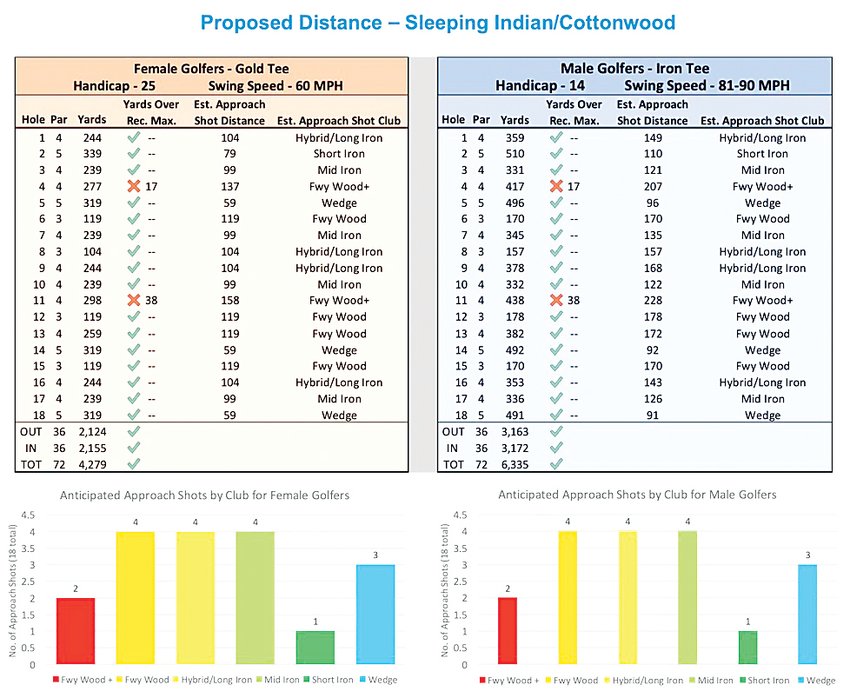 Proposed distance for the new "Forward Tees" as suggested by the 2019 USGA study, including a higher variance of club types suitable for reaching the …

Once ground is broken, initial construction will take about a month, with another month allotted for sod to take hold in the soil and grow in. Completion is anticipated for some time in May.

BREAKING: Thornton won't appeal Court of Appeals ruling on water project
The City of Thornton will not appeal Colorado's Court of Appeals' decision denying their permit to construct a water pipeline in Weld County, the city said on Oct. 6. "After thorough consideration …
Hit-and-run crash hurts one; Frederick police investigating
Frederick police are looking for a newer model Subaru in connection with a hit-and-run crash that injured a juvenile Oct. 4.   The unidentified victim was riding a bicycle at the time. …

Loneliness may play early role in Alzheimer’s, Colorado researcher says
Dr. Rebecca Mullen had been seeing a patient for about four years, and she noticed he was becoming more and more lonely — he would come to see her more often just for a social connection. Then, he started to experience a rapid decline in his memory and was diagnosed with Alzheimer’s disease.

Unsealed affidavit provides account of Arvada Police Officer Dillon Vakoff’s murder
An affidavit filed by Arvada Police Detective Julie Glynn regarding the events of Sept. 11 that led to Officer Dillon Vakoff’s murder was unsealed on Sept. 26, shedding light on the events led …
History abounds at Golden's Autumn Fest
For everything there is a season, and autumn has become the season for immersive learning in downtown Golden.

Varenyky, borscht and roulade, oh my!
“Now whenever you see ravioli, you can call it Italian varenyky,” joked Chef Bo Porytko, at Ukrainians of Colorado’s cooking class fundraiser.